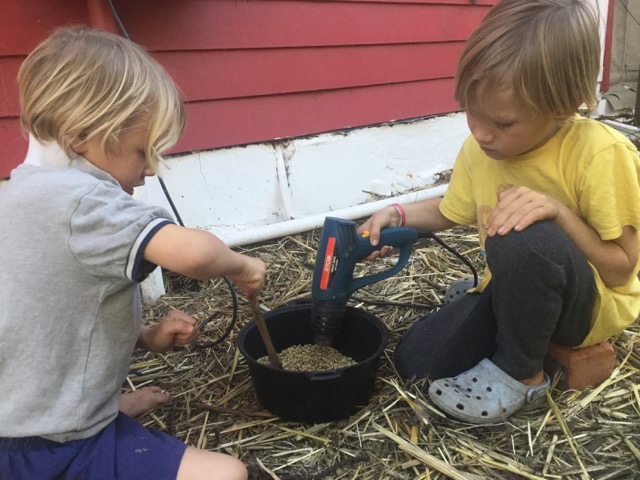 Jo and I love our coffee! I mean, we really LOVE our coffee. That’s why we’re sharing the love by offering the Official Organic Good Food Club Coffee! For the past five years we’ve been buying bulk green beans and I’ve been roasting a weeks worth of coffee at a time for ourselves (selfish is i know!) But now for the first time, we’re offering to you guys.

When we started the Good Food Club here, Bean There was our coffee vendor. Even though members wanted coffee, we never got a single order because the minimum order was 5kg and we couldn’t make that with our small group buying a few 200g bags.

We sourced a bulk order of certified organic beans (mixed origin). We roast in very small batches by hand using a heat gun. The most important factor in good coffee is when the roast happened. Kind of like fresh baked goods or fresh produce.

We’ll be roasting these to a full city roast on Thursday. So it’ll likely be the freshest roast you’ve had, with fewer miles and much less packaging. We love our coffee and hope you will too.

Our sons, Noah (7) with assistant Eli (5), decided they would help out with roasting coffee. This month, we wanted to support them in doing this, but it is just a trial run to see if it works for our family… They’ll get to earn some of the profits and some will go to a local non-profit.

We also offer green beans if you want to try your hand on roasting. Roasting your own is fun and easy (or you can make it as complicated as you want). The best resource for learning about coffee roasting is Sweet Maria’s website if you try your hand at it. 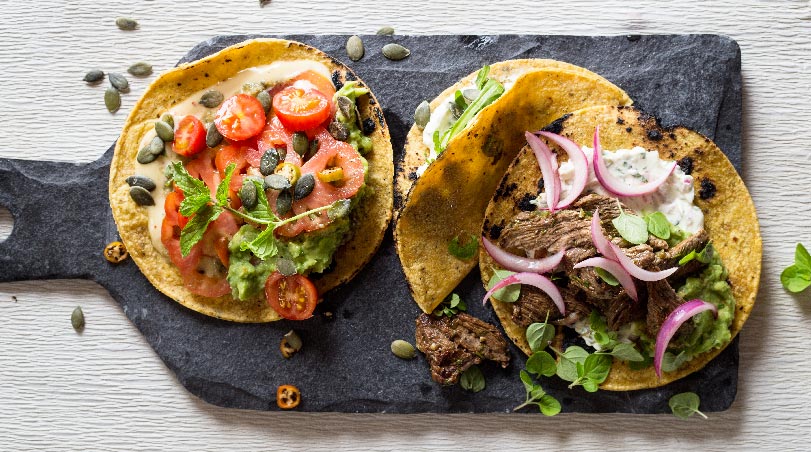 Last month we added a new flour vendor, Santa Anna’s. Their flour is very good quality stone ground flour made with heirloom wheat seeds. The reviews from the other Good Food Clubs in Mowbray and Observatory is that there flour is pretty spectacular. They were also raving about the Organic Corn Chip and Organic Corn Tortillas. Which was what caught my interest.  Corn chips and Tortillas in South Africa???  I had to try… And they did not disappoint! Having lived in New Mexico as a child, these chips brought back mouth watering memories. The chips are good plain, or with salsa or if you’re like me, you can make nachos, loaded with every type of cheese, jalapenos, pulled pork, corn, sour cream, avocados… there’s really no limit to the imagination!

The only problem is that they come in boxes of set quantities. So last month, we ordered 1 box each of the tortillas and chips. After our members took their portion of the order, Jo and I were stuck with buying up the rest which we didn’t mind since they were so good. But I might need to create some kind of stock level in Woocommerce to limit the number of order so that we don’t end up having too many left order.  I’ll think about it.

I also noticed the tortillas do not last long. They will mold quickly, so best to throw them in the freezer or use them quickly. To me that’s a comforting sign that they’re not adding anything extra in them. I once left a supermarket baguette out to see when it would start growing mold… it never did.  Scary.

Next month, we’ll be adding a few more local vendors so, I’m pretty excited about that. I’ll give more details when we open our next month’s orders.

Learn more about Santa Anna’s on their website: http://santaannas.co.za/ 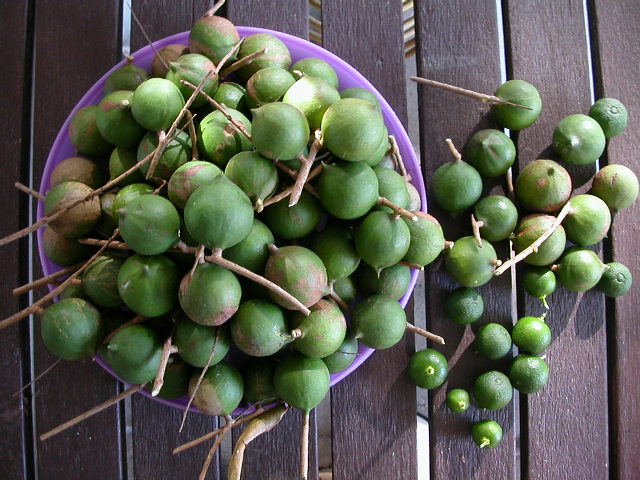 I’m super excited to announce a special order we’ll do for our May Good Food Club order: Macadamia oil!!!

Have you heard that macadamia oil is the new olive oil?

So if macadamia oil much better than EVOO, why isn’t everyone using it? I think it comes to cost. Macadamia for the rest of the world is an really expensive nut so it’s not as common in the kitchen. But here in South Africa (3rd largest producer in the world) macadamia is a commodity. I’m always shocked how cheap macadamia nuts are here. So, Jo thought we should be able to get a good deal on macadamia oil for our Good Food Club here.

And Jo did! She found a distributor here that will sell us boxes of 500ml bottles (glass) but the delivery cost per item is pretty high. That’s why we’re going to do a one-time bulk order for the oil this month and see how it works out for our club. We’re also getting it at a really good price that’s comparable to EVOO prices (for 500ml bottles) and it’s a lot cheaper than the macadamia oil prices at retailers.

So, check out McNutti Macadamia Nut Oil on Good Food Club website and order a bottle or two or five (remember, it has a 2 year shelf life!)

Macadamia oil has a subtle nutty flavor. Great as a base for salad dressings. I can also imagine it being nice for hummus. It’s delicious on meat, fish, lamb, chicken and also for cooking vegetables. For baking it leaves a buttery flavor making me wonder how awesome it would be with brownies… yummy.

Like, many of us, we are frantically trying to fill our GFC order on Thursday night. So Jo was thrilled when I showed this feature on our website. It lets you add to your shopping cart, everything from a previous order. What a time saver!!! It’s so quick and easy, you could do on your phone as you’re falling asleep (just remember to press the check out button!)

Everything will be added to your basket. Unless, a product is no longer available.  You can then take things out, add more items and then “Proceed to checkout”.  Easy peasy! 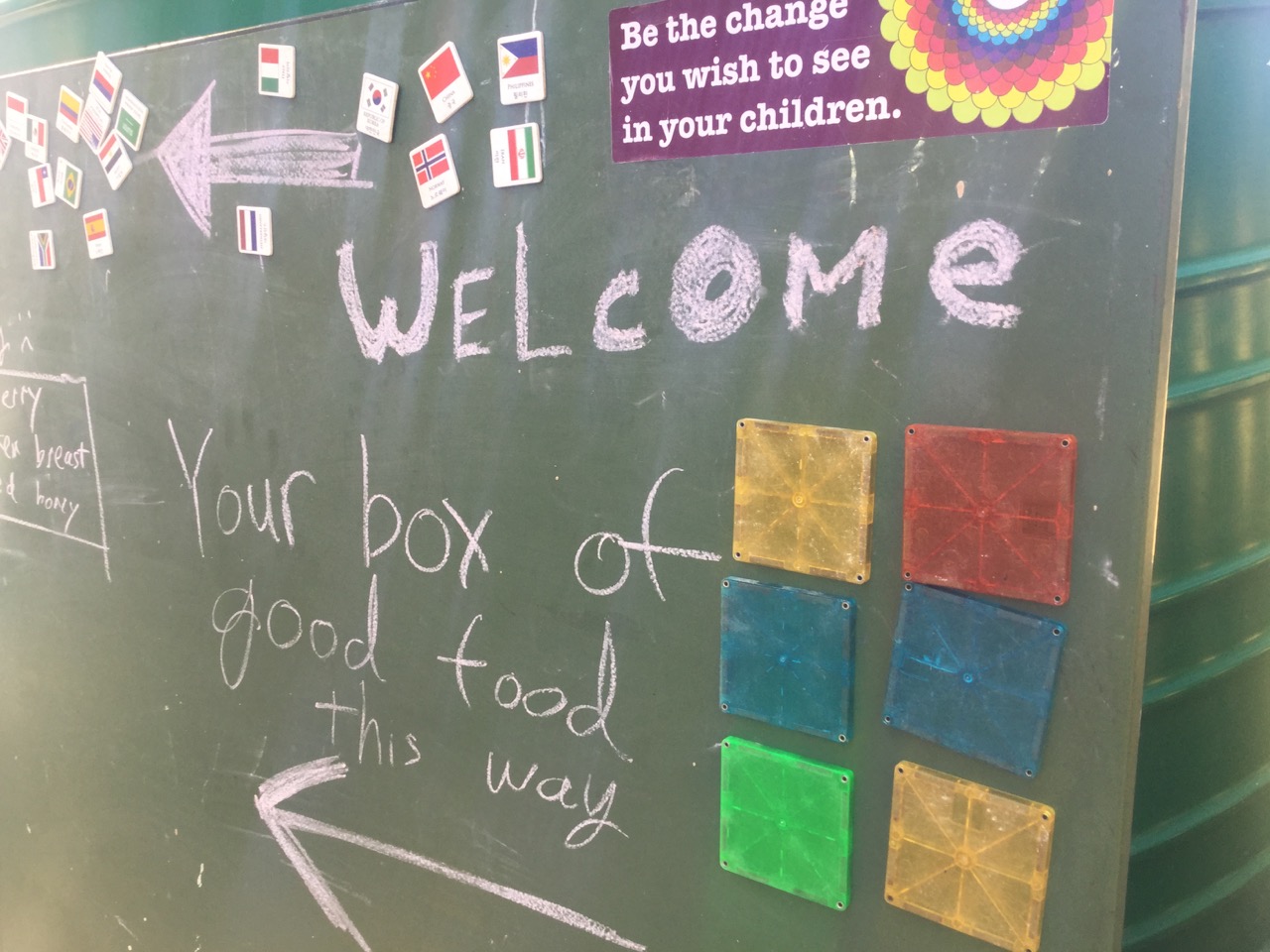 We had our second market day! And there were only a few little hiccups. One delivery van broke down and was really late and there were few mix ups with the new reusable glass containers Mysthill is using.

I’m glad the last two market days were small. It’s been a good way to work out issues and learn with out messing up too many people’s orders. After a few more market days we’ll definitely have worked out our system and have less hiccups. So, a BIG thank you to all you early GFC members and for your patience as Jo and I try to figure things out. I was also happy to see new faces this time. 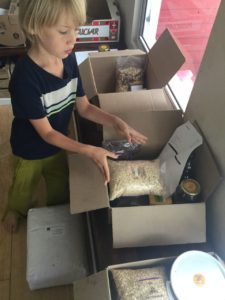 Noah helping fill everyone’s boxes. We have an order form printed out for you. We ask that you go over your items at pick up and then I’ll double check again before you leave. That way we can all check each others work and you don’t end up with smooth peanut butter instead of crunchy peanut butter. That would be bad! 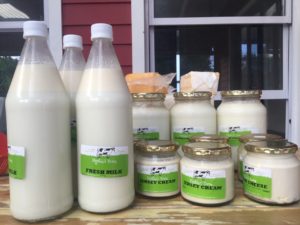 Here’s Mysthill products in glass. So pretty. The milk from Mysthill can be ordered in 750ml reusable glass. The glass comes with a R8 fee that will be credited when you return the glass at the next market day.

We love that Mysthill is using reusable glass as we’ve been consuming a lot of their milk! Mysthill is actually phasing out a lot of plastic. So next month, the yogurt, cream and feta will only be available in glass containers.

Mark your calendars. The next GFC market days will be on:

(Use the “Tag” drop down to filter to view a vendor’s products.)